EVO/EVO+ is an electronic locking system for furniture and lockboxes – and it works entirely without keys and transponders.  Simply push and turn the knob to enter the digits or symbols for the individual code. It can be used in a variety of application areas, ranging from the office to the gym and in public buildings. Click here to go to EVO/EVO+ 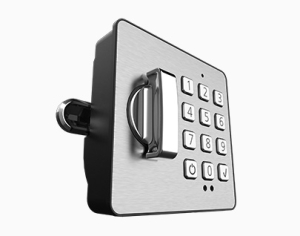 The BeCode PAD keyboard lock is an excellent alternative to the cylinder locks BeCode EVO/EVO+ and the radio-controlled BeCode AIR/AIR+ systems. The highly efficient energy management system developed by BeCode allows the BeCode PAD to be operated up to 20 years without changing the battery once (with a maximum of 1,000 closings per month). Click here to go to PAD or miniPAD